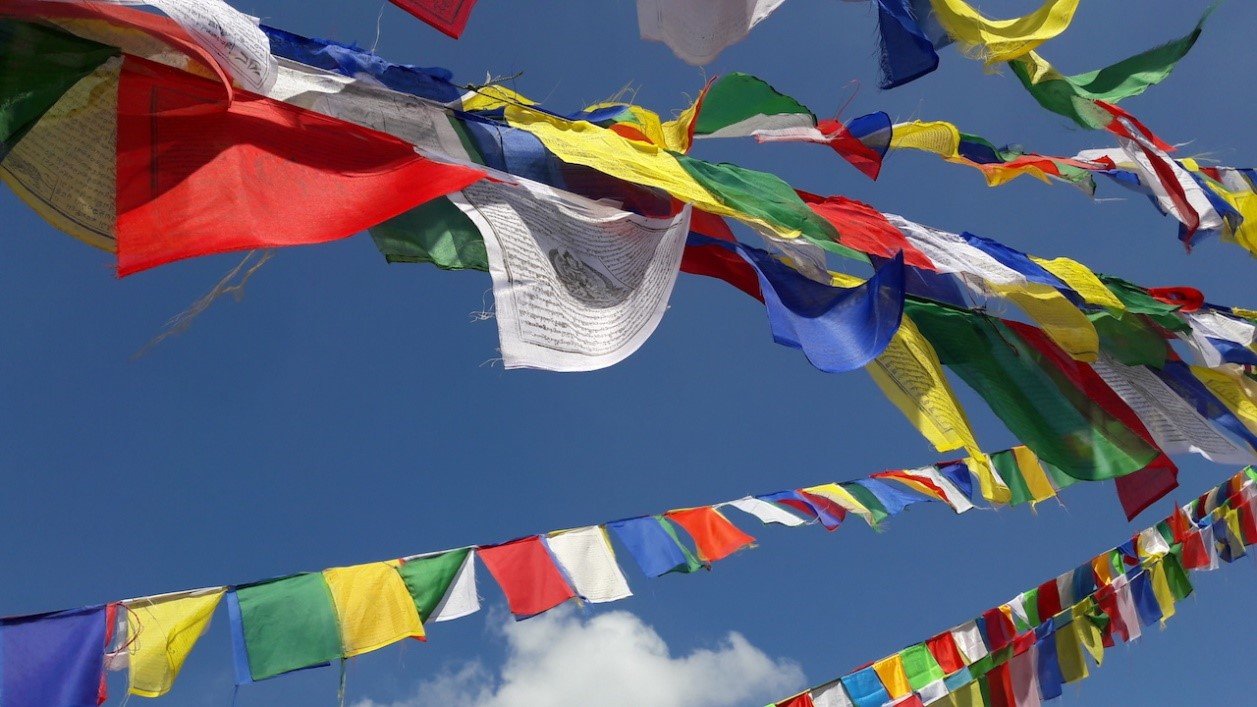 In remote mountain areas, monasteries often take on the responsibility of education for the area. Some parents send the best children in the family so that they can receive systematic education and training. Some children come from very poor families or were orphans. The little monks in these monasteries must not only learn to take care of themselves, but also understand how to care for others. These few years, through our stationary project, we had been able to forge good relationships with these monk students who live in places that are little known to the world. These monk students, with their faith, study Dharma and read ancient scriptures day after day with firm and devoted heart. 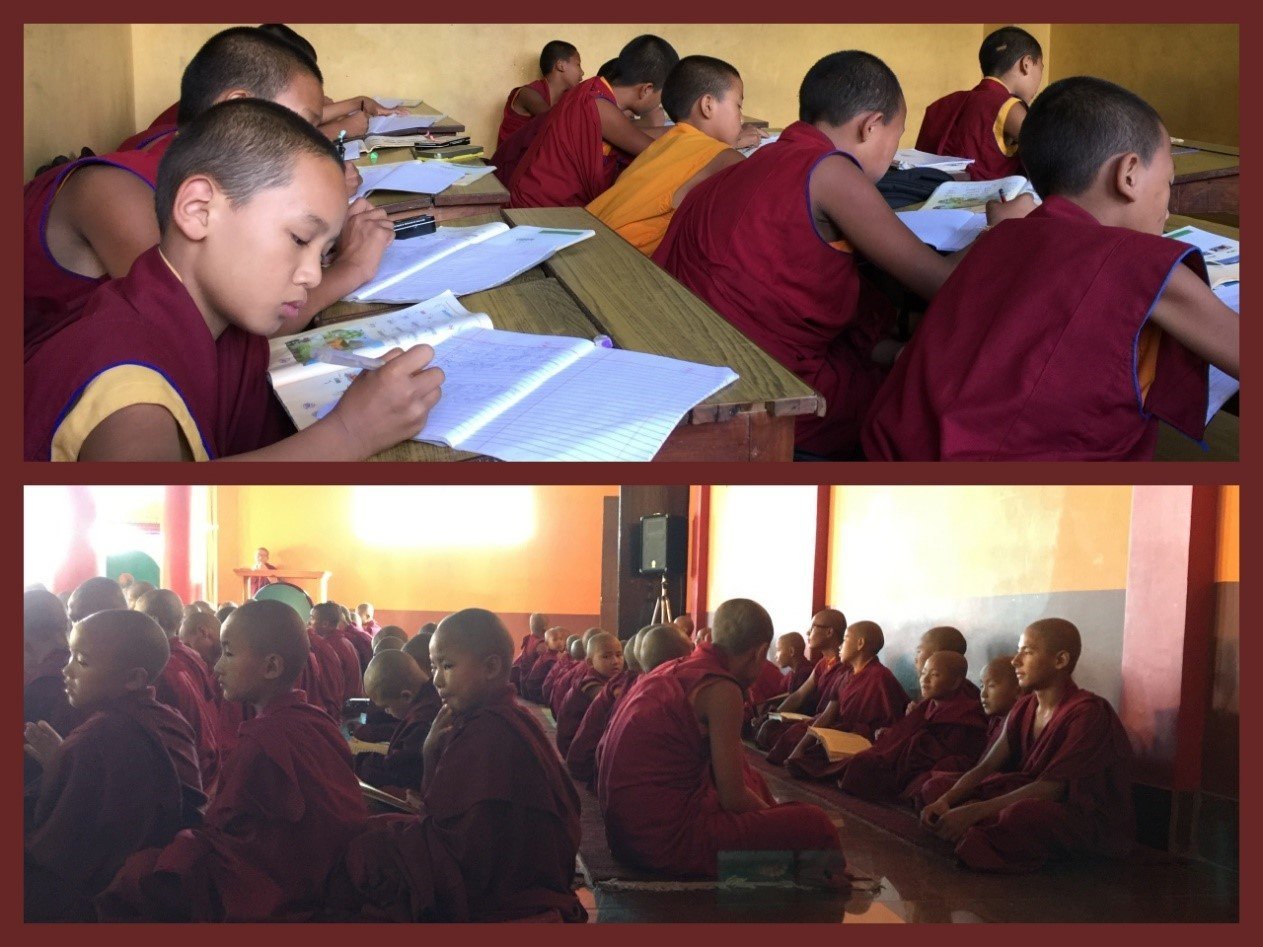 The Buddhist schools supported by DENER, include Chinese and Tibetan Buddhism. Among them, the little monk students at the Tibetan Buddhism Monastic school, aged from six to thirteen, followed the basic learning curriculum. Generally, students of monastic school were very strict in their daily routines. Before four o’clock in the morning, they would get up to go to the hall for chanting. After breakfast, classes start at 8 o’clock. Primary courses are divided into: learning characters, basic Buddhist Knowledge, etiquette and Ritual Trainings; others also include English, Tibetan, science and Thangka painting. At noon, the students would eat together and then continued the two lessons in the afternoon. 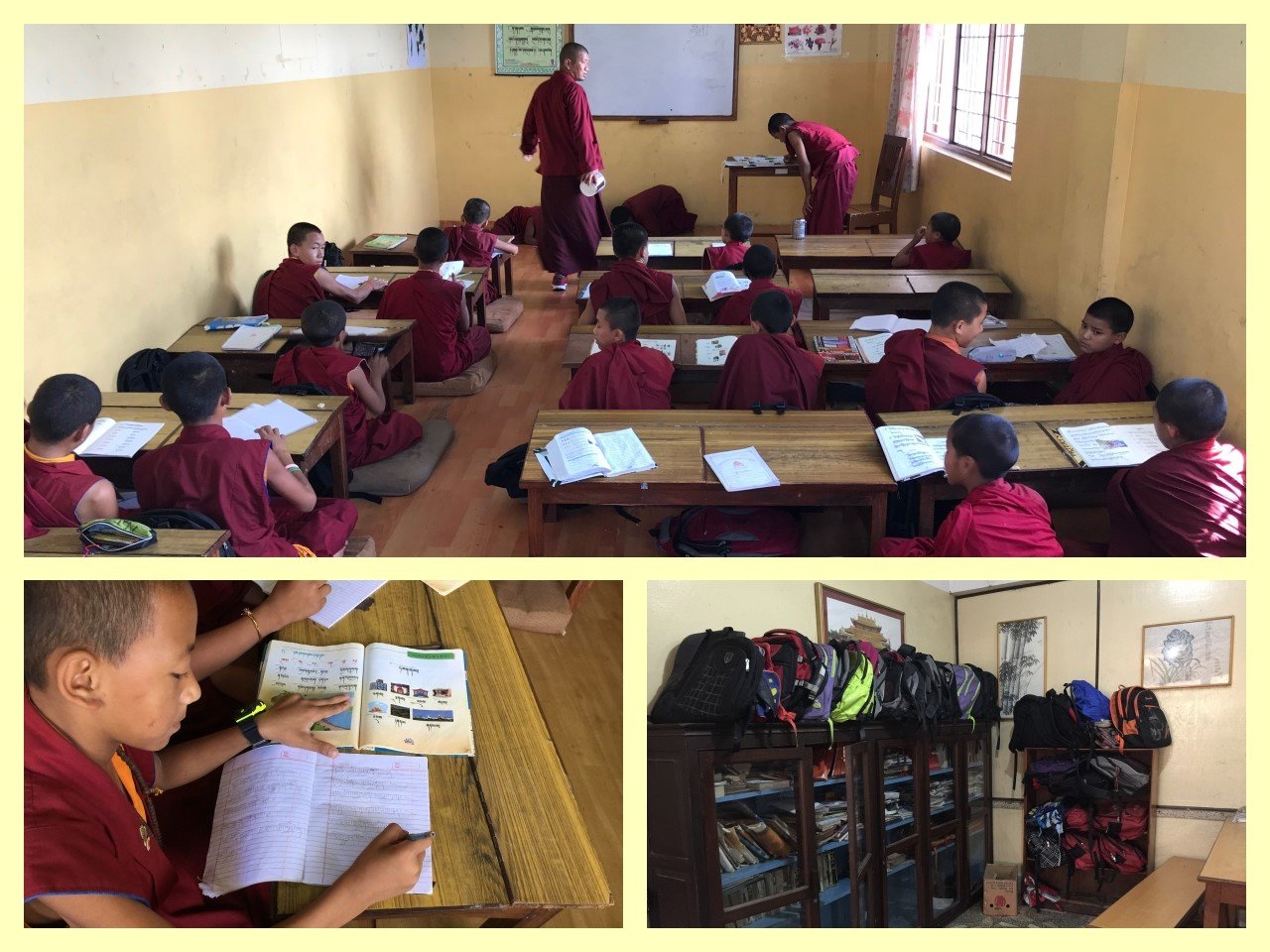 The little monk student in the photo were taking a natural science class. The homework given by the teacher is to find different plants near the school, then make them into specimens and introduce their categories and attributes. The purpose of the teacher’s teaching was to stimulate the enthusiasm of the student’s research through activities and encourage them to cooperate with one other. 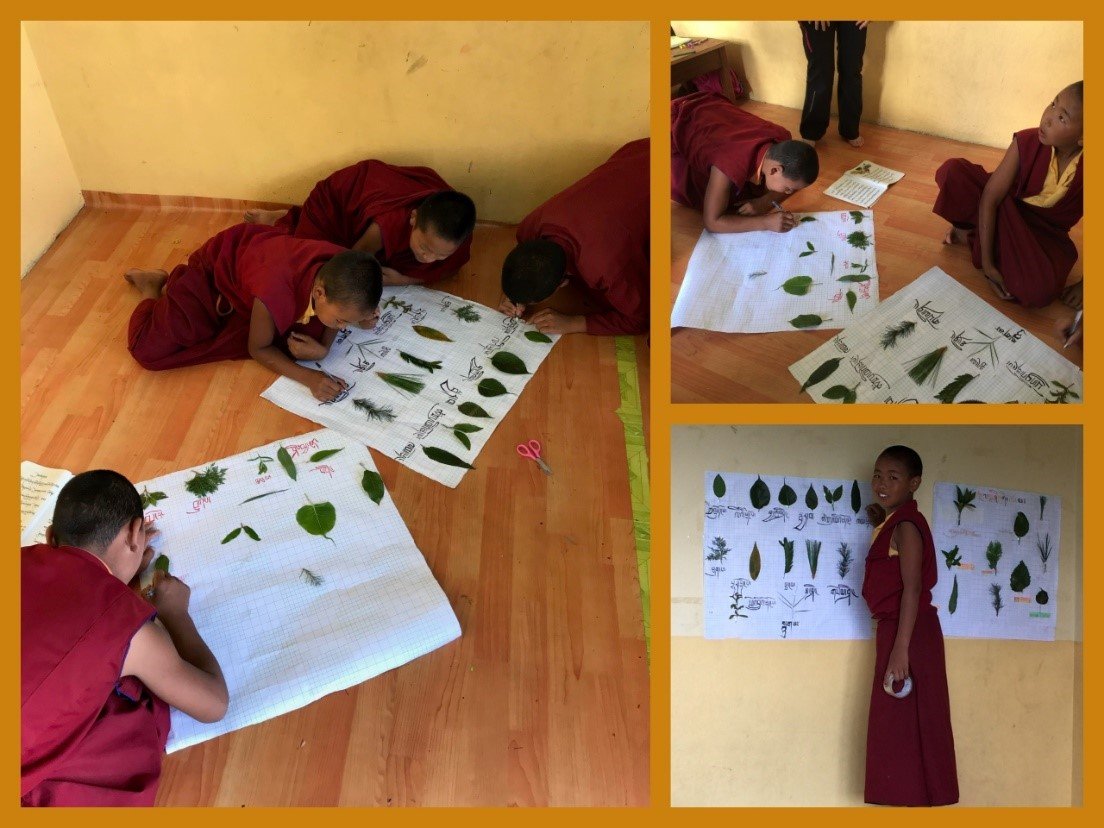 It’s time to eat! The monk students were seated in order and chanted a prayer before eating. Then, the monk student responsible for the day prepared and distributed meals, such as bread, vegetables, and milk.  During the meal, the monk students should not talk loudly or get up and walk around at will. They must eat and drink politely until the bell sounded, this would signal that the meal is over. The monk students then read the prayer again and thanked the donors for offering this wonderful meal.

In the late afternoon, the monk students chanted in the hall. Then, there would be an hour of sports time for the monks, mainly to let them exercise and sometimes to play basketball, table tennis or football together.  After dinner, there is self-study, scripture, or meditation classes, before the day finally ends.

From a young age, the monk students lived in groups in monastic school. At a young age, the student learned how to arrange their own living. At the same time, they also learned to share the work in monastic school.  The more senior monk students, in addition to study scriptures and other disciplines, are also responsible for the different duties at the school.  For example, they would need to take care of little monk students, teaching the younger ones how to cook and how to clean around the school. 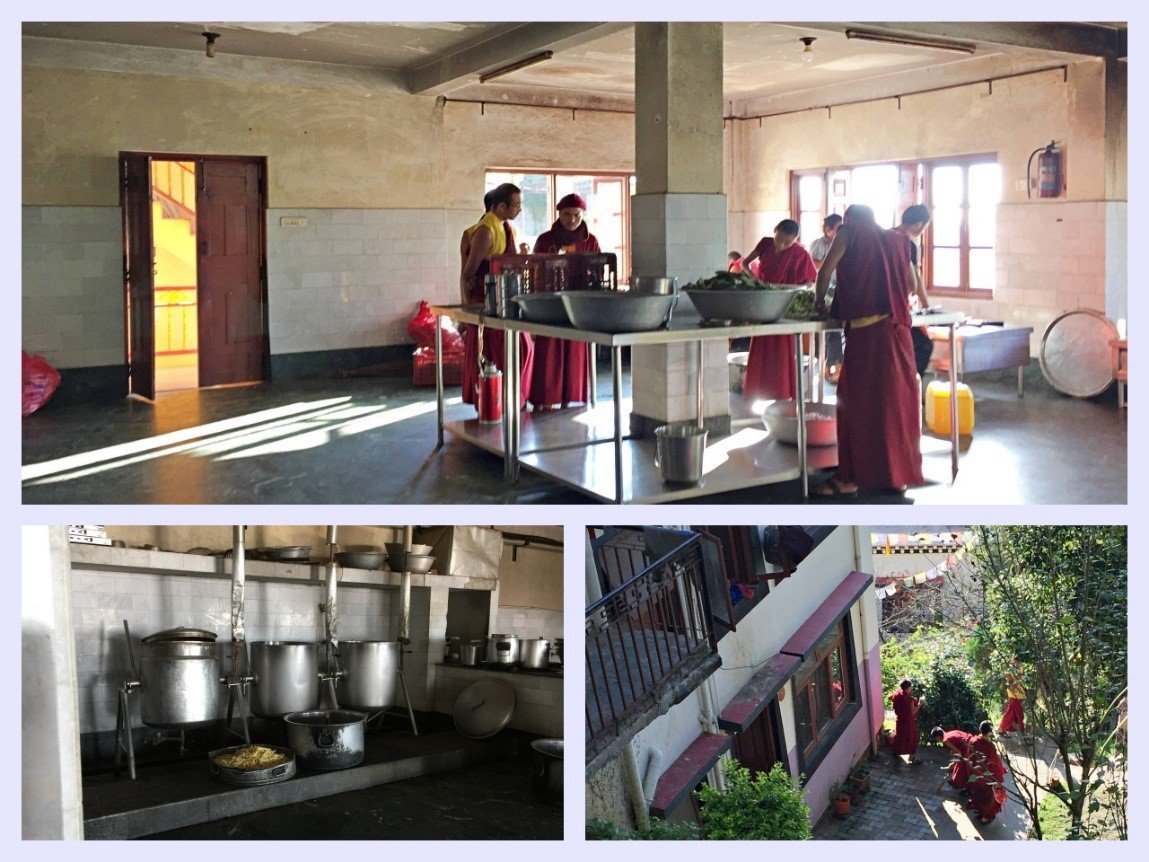 Generally, monk student would have to complete several years of basic education, then pass examinations and then they could enter into Advanced monastic institute. The word Shedra, in Tibetan, refers to a Buddhist institute that recruits junior high school graduates. After entering the Shera, the monk students were committed to study the five major theories of Buddhism and should complete the three studies which include discipline, shamatha and wisdom. In addition, according to the regulations of the respective Buddhist institutes, there will be different course requirements. When the students complete the classes prescribed by Buddhist Institute and passed the examinations, they will be awarded with corresponding degrees. Among them, some Buddhist Institute grant a bachelor’s degree after a monk student has received Buddhist education for nine years. And if the student continues his study for another two years, Archarya degree (Master of Philosophy) will be granted. To apply what they’ve learned into actual practice, the monk students must complete meditation and the traditional three years and three months retreat training. In this way they become a qualified teacher. 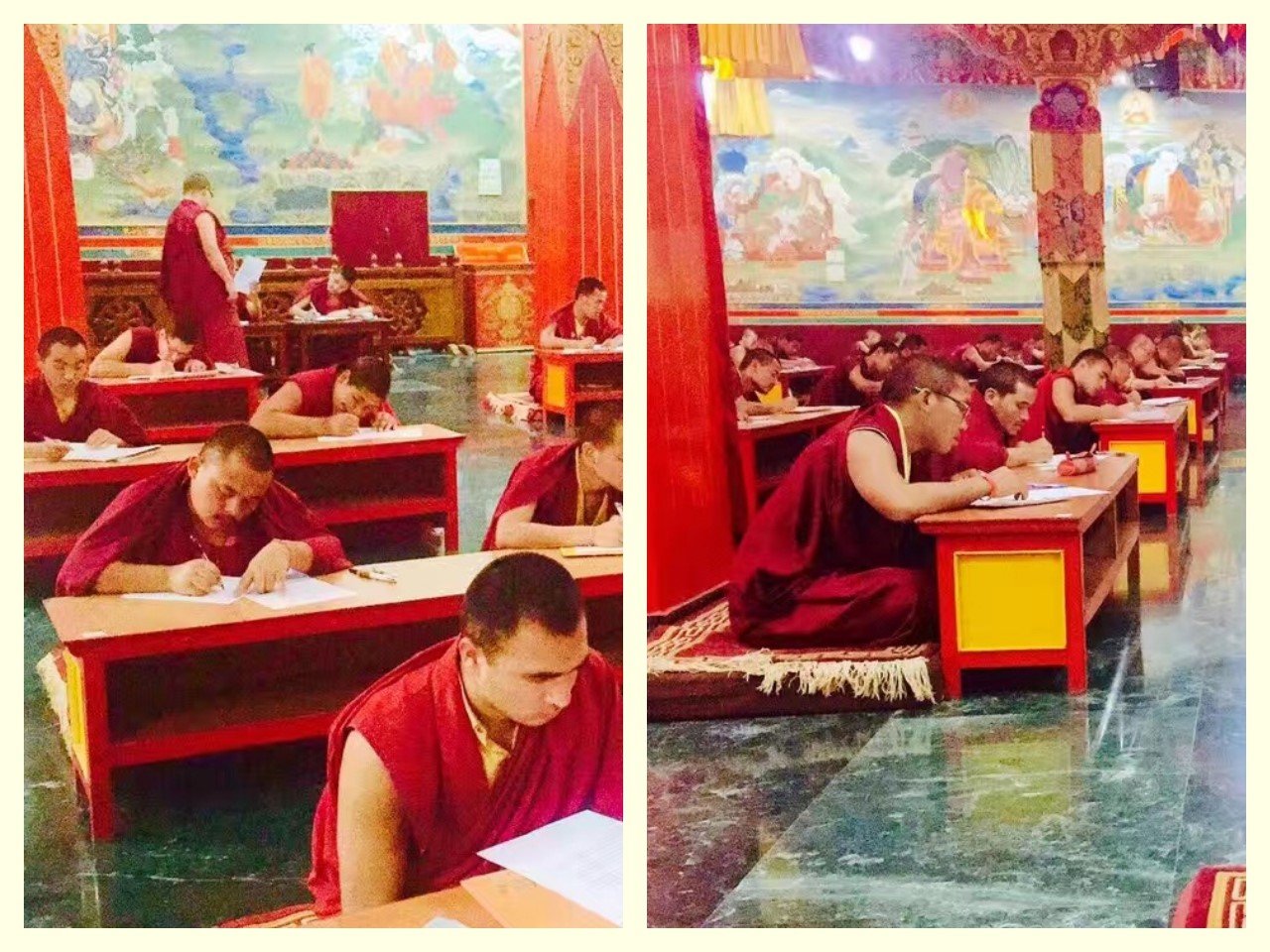 There are two types of courses at advanced Buddhist Institute: compulsory and elective subjects. Compulsory subjects include Buddhist philosophy, psychology, meditation methods etc. Elective subjects were more diverse, including linguistics (English, Hindi, Tibetan, Sanskrit, Chinese etc), literature (History of Buddhism, Tibetan literature), art, astronomy, medicine, science etc. Although the monastic institute followed a traditional very strict teaching method, but also added modern education in response to the changing world. For example, some monasteries provide medical services to residents in the nearby villages. Therefore, the monk students would learn medical knowledge and technology in order to serve others in the future. 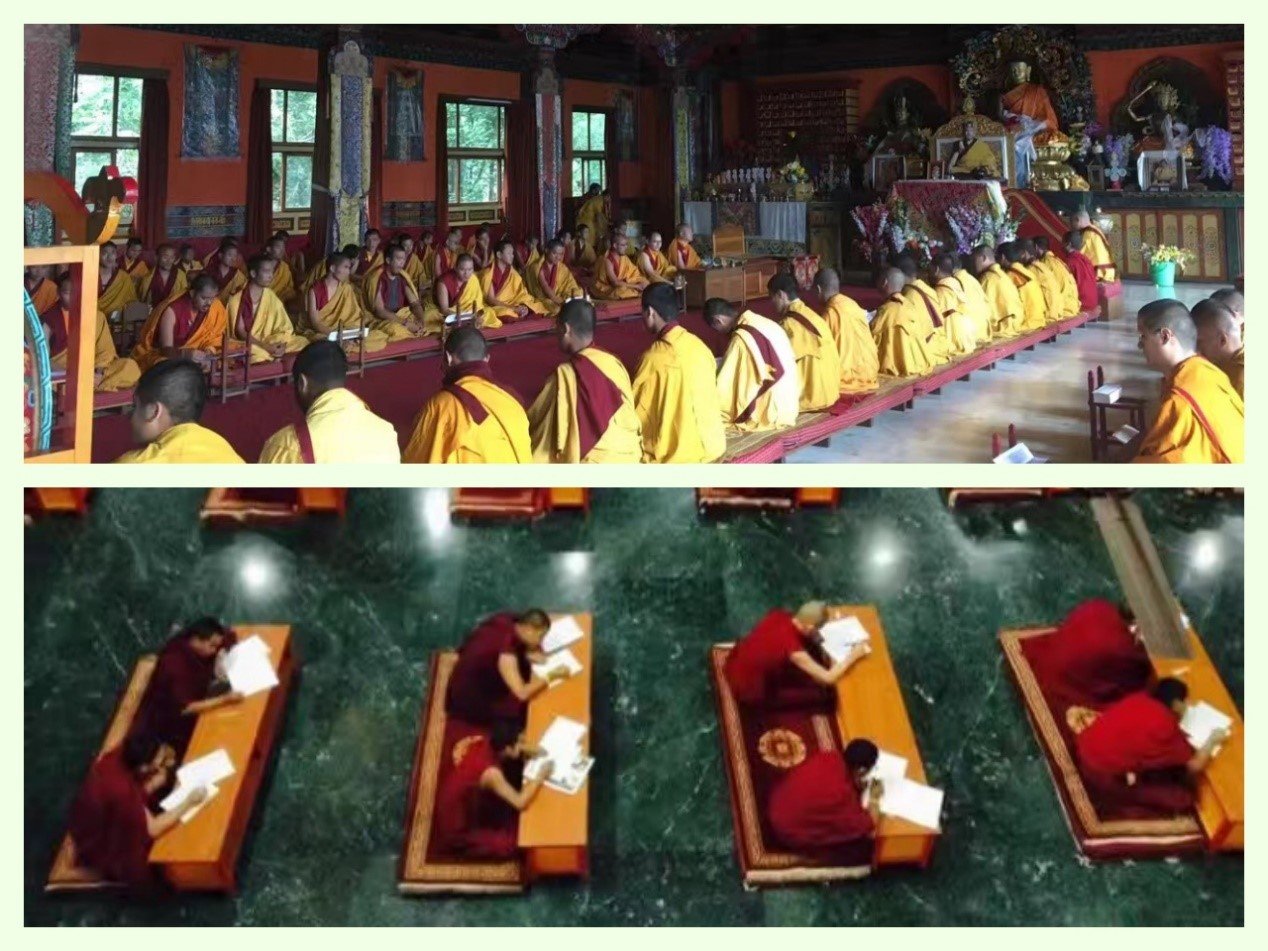 The students in these Buddhist Institute were mostly of Tibetan descent, mainly from the Himalayas, Bhutan, Nepal, Sikkim and India. In Tibetan culture, to send the best child in the family to a monastery was a very proud thing for the family.  Because they are convinced that the children would receive good education and will be able to take up the responsibility for promoting the Dharma in the future. In the future, they will bring benefit to many people and this was what the parents were most proud of. The tuition, living expenses and other educational expenses of Monastic Institute were all derived from the support of various charities and kind individuals around the world. This also included the salaries of the professors, but there were also many professors who were volunteers. Therefore, every year DENER will support the institutes and monk students with stationeries.  And in this way, we hope to continue protect and support these Buddhist Institutes’ educational missions.

In August and October of this year, the team of volunteers from DENER came to the villages around Yushu Qinghai, and several remote Buddhist Institutes in Nepal. Volunteers donated backpacks and stationeries to the monk students and interacted with them. 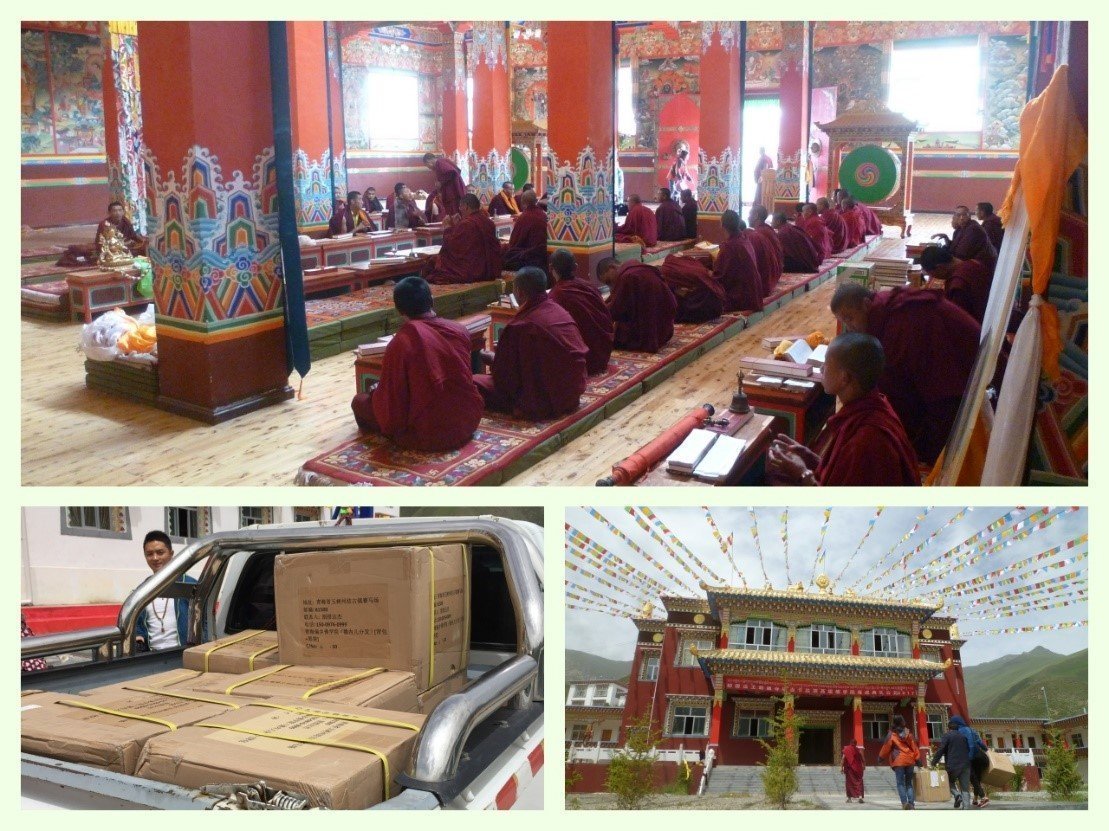 This was the Dangka Monastery in Yushu, it had a more than 900 years of history. That day, when our group arrived at the monastery, the monk students were chanting in the hall. Volunteers from DENER, with great joy and respect, handed the backpacks that were brought from thousands of miles away to the students who are at the monastery. 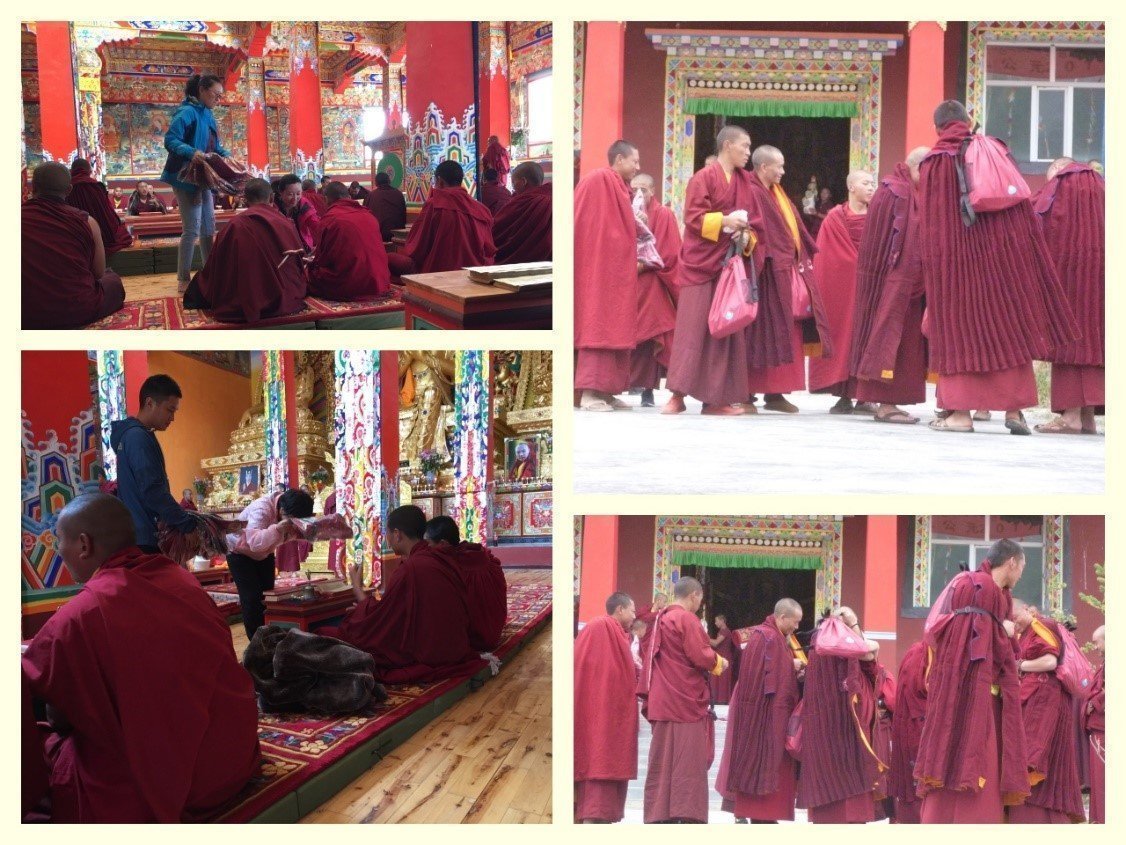 After chanting, every monk student quickly opened the backpacks to try. When seeing their happy faces, our volunteers couldn’t not help but smile. 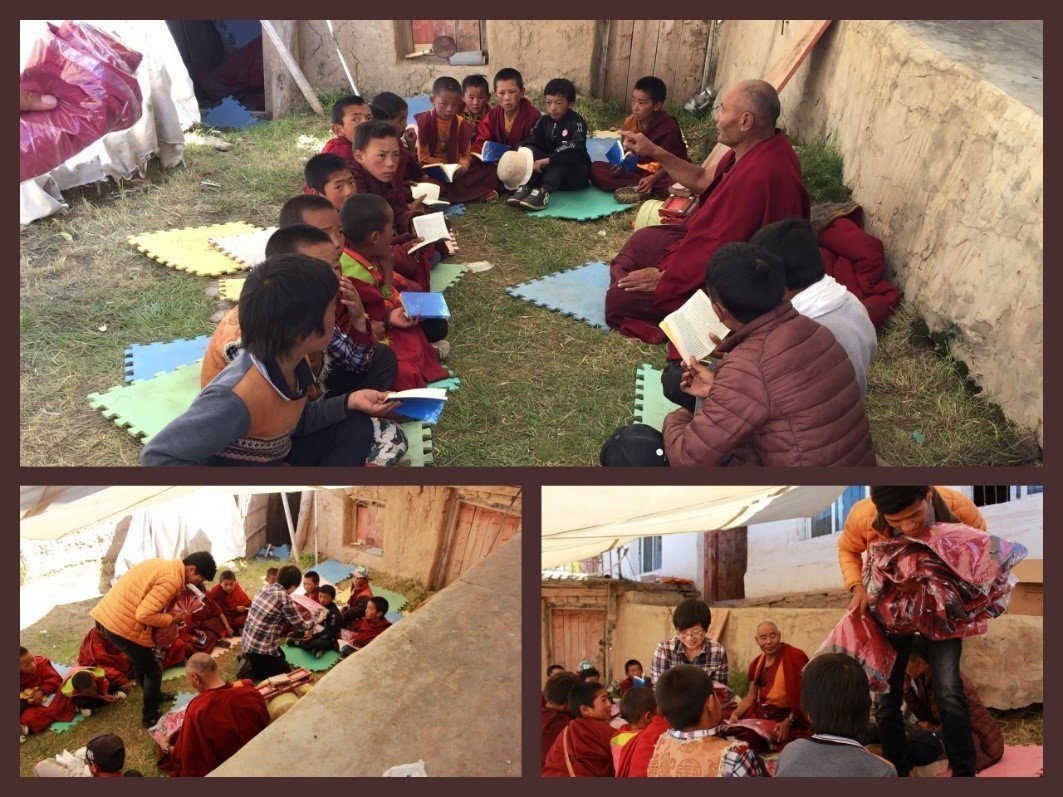 Our group also came to Tashu Monastery at the border of Sichuan and Qinghai. Although the surrounding scenery of the monastery was very beautiful, the living environment of the monastery was quite difficult. At present, there are about one hundred twenty monks in the monastery. Among them, there were some young children who, because they were too young, were studying in a small tent outside. 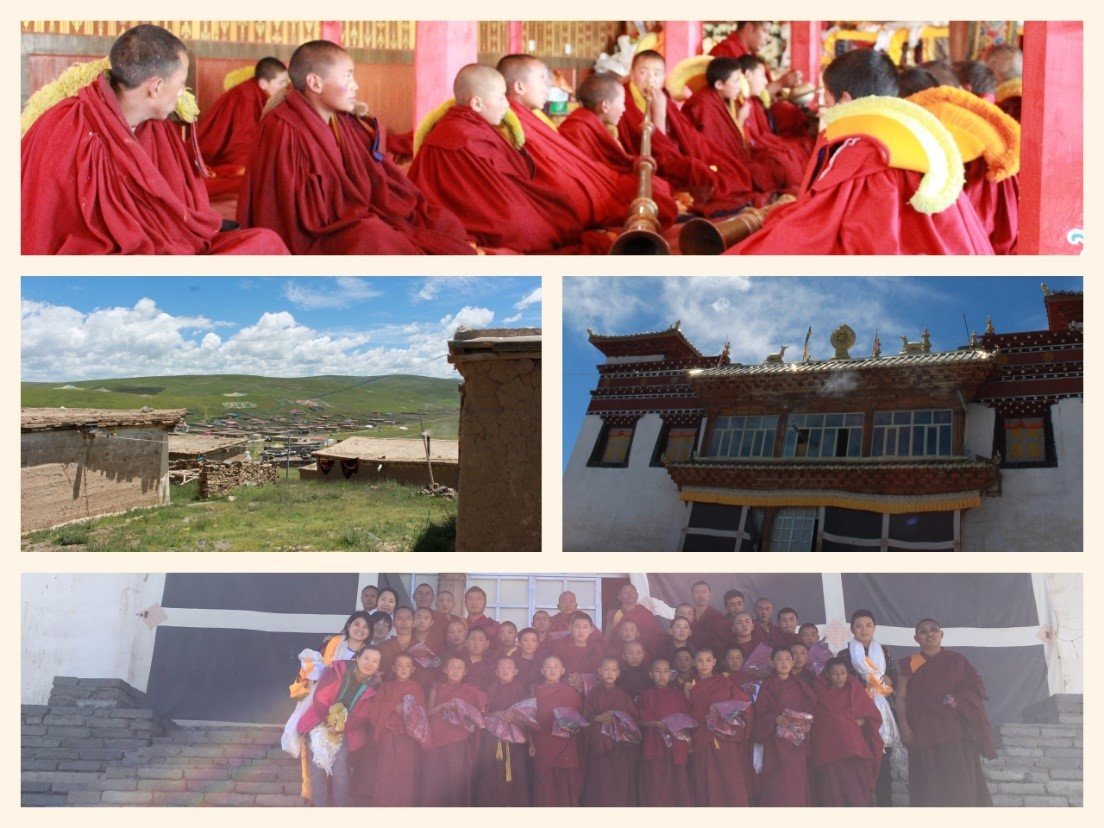 Volunteers from DENER came to Thrangu Monastery and Shechen Monastery in Namo Buddha, Nepal. In the solemn hall of the monastery, while the monks were reading the scriptures, we reverently handed the backpacks and stationery one by one.

In Buddhist Institute in Nepal, little monk students were lively and cute. Among them, the youngest one was only six years old this year.  When standing next to the box, the child was particularly small.  But at this institute, the teachers and the older monk students would take care of him. It must be a happy experience to grow up together in Buddhist Institute since childhood. 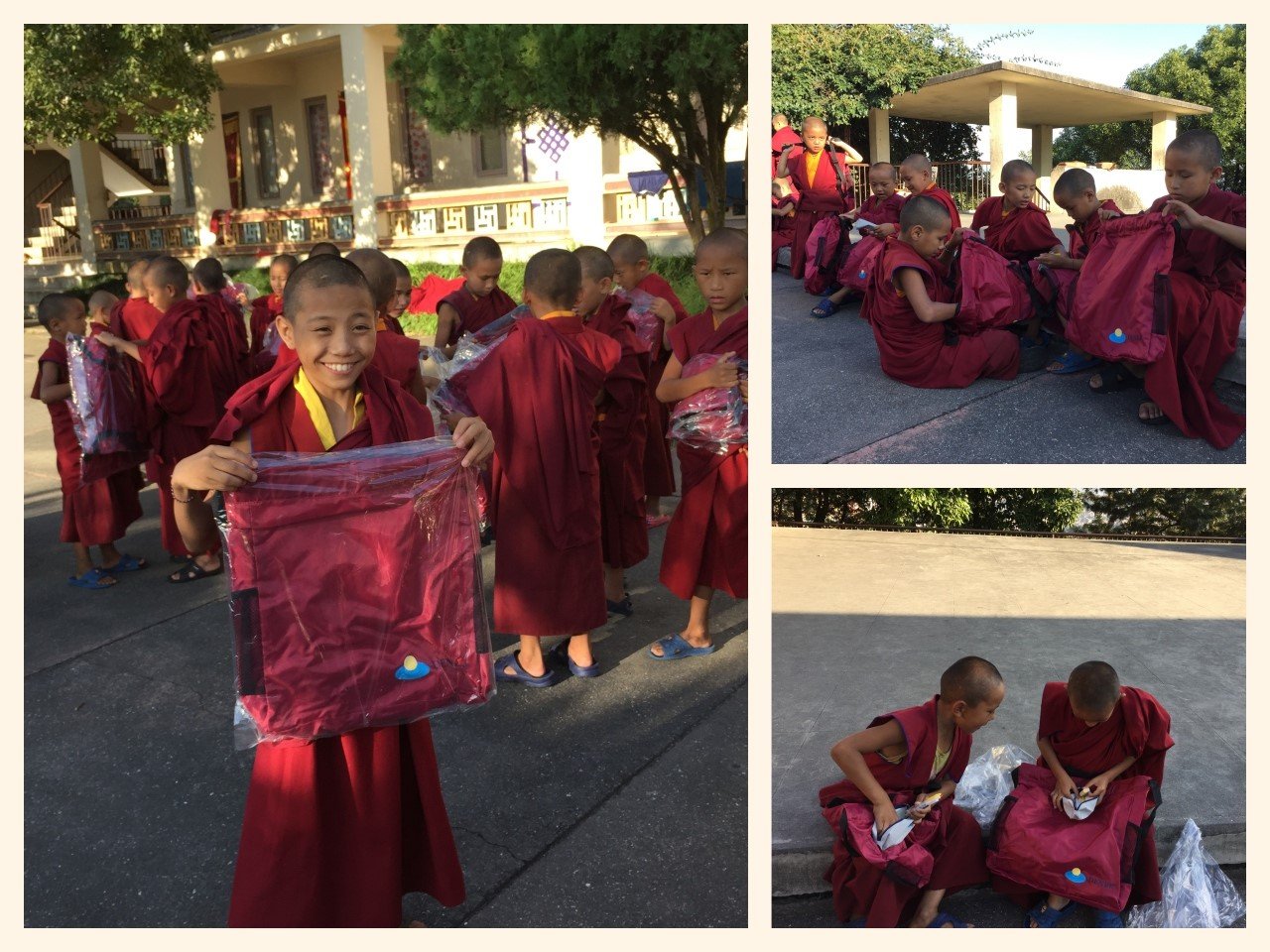 The little monks were so excited when they got their backpacks and stationery, they couldn’t wait to open them and take a look…

In Nepal, our volunteers interacted happily with little monk students, and appreciated this wonderful experience.

Looking back on the bits and pieces through the years… We’ve held on the belief that access to education would lead children in the remote area to more possibilities.  With the stationary project over the years, we’ve come to different parts of the world and in touch with the monastic institutes.  The deeper we understand the Buddhist Institutes, the more we admire them for their commitment and prayer for world. Now the love we exchanged over the years had a deeper meaning. Whenever I hear the sound of chanting from afar, the words of chanting were not only blessing of ancient wisdom, but also embodied a little kindness from you and me. In the remote area of Qinghai and the mountainous areas of Nepal, everywhere we go, we could see the brightly colored religious flags in the air. There was a saying that when hanging the religious flags, one should hang it high. Then when the religious flags fly high in the air it would bring good things to everyone and everywhere. Like the monk students studying in these places, they’ve always carried the belief of benefiting others and hope that more and more people would benefit. We also silently made a wish hoping that DENER would be like a flying religious flag, wherever we go, it would bring love and hope to others.