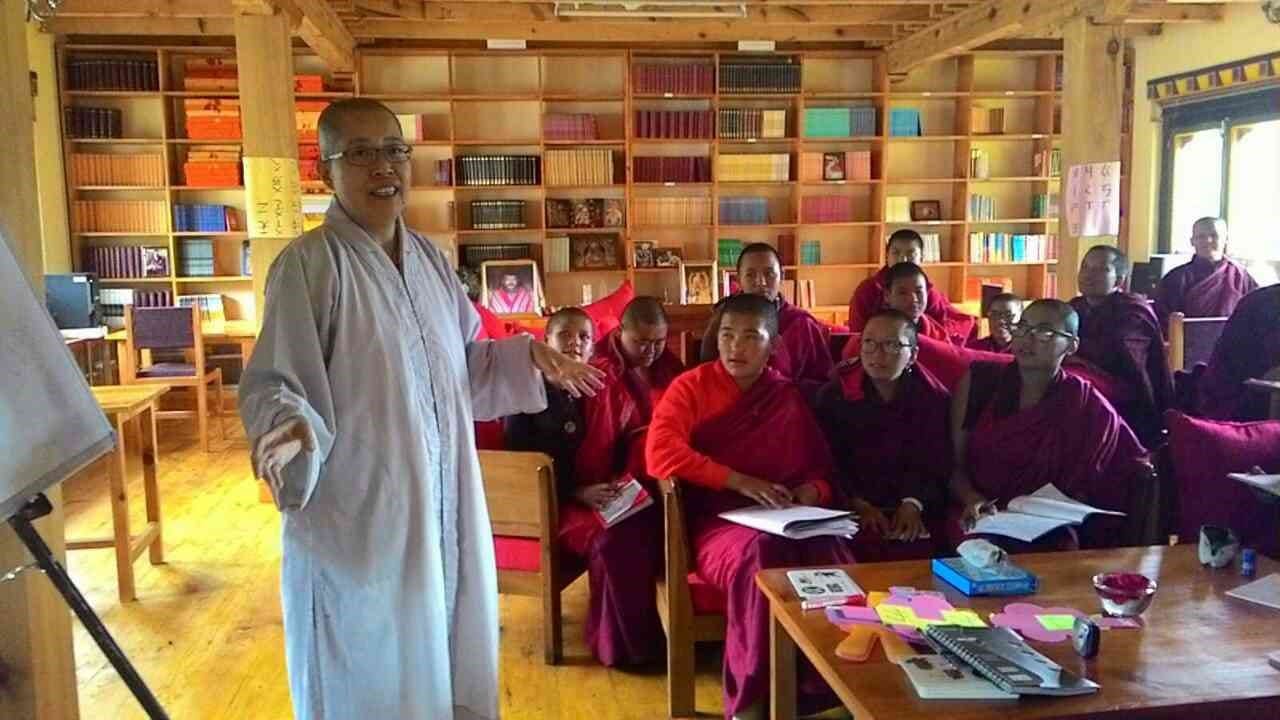 Just give a chance, everything will be possible！

August 26, 2019 was the third time I set my foot on this happy land of Bhutan. Bhutan has a population of approximately 750,000, and 80% of whom believes in Buddhism. Due to wide influence of Buddhism, all houses there use Buddhist totems or colored paintings to decorate inside and outside. There were also large or small meditation rooms at each home.  During special festivals, monks would be invited to homes to chant sutras and pray for blessings. 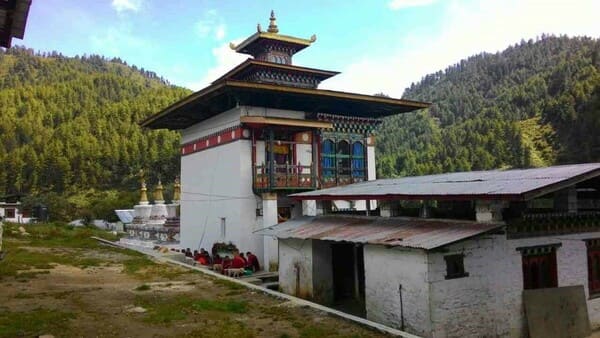 This time I went to two Buddhist academies: Sherub Chhoeling Ani Shedra in the suburbs of Thimphu and Buddhist Academy of Tara Temple in Paro. I was there to teach Chinese courses and introduce Chinese Buddhism. I started the teaching courses with simple Chinese and a little English.

The Buddhist College of Sherub Chhoeling Ani Shedra was located on the outskirts of Thimphu. It takes two hours by car from the airport to this temple. Since all the nuns attended the puja that day, only two nuns stayed to take care of the temple. A simple room was arranged for me. 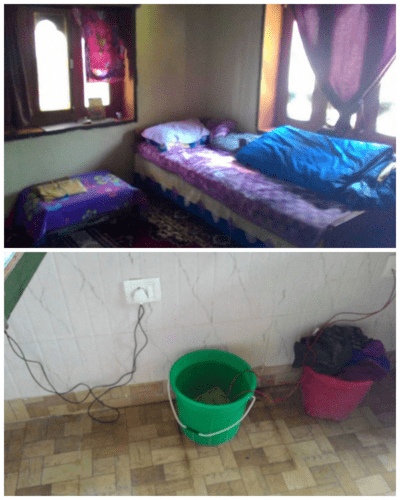 There was no light in my special toilet, and there was no water from time to time. There is a bed in the room, it was very warm. I used my suitcase as a table for chanting. It was very practical!

The temple in Bhutan, traditionally adhere to the rule of two meals a day. Dinner was not required, and the meal time was determined by each temple. This Ani temple also ate two meals a day. The dishes for each meal were roughly the same. Two plates of rice with a bowl of cheese and a lot of chili. If you were hungry at night, you could eat Instant noodles in a small room to relieve your hunger. Here they use a large electric heating plate to boil water for a bath. It took fifty minutes to boil a bucket of water. Because there was no designated place to wash clothes, a simple bathroom was also a laundry room. Although there was an old washing machine, it was used only for large clothes. Their lives were very tough, but their hearts were not. 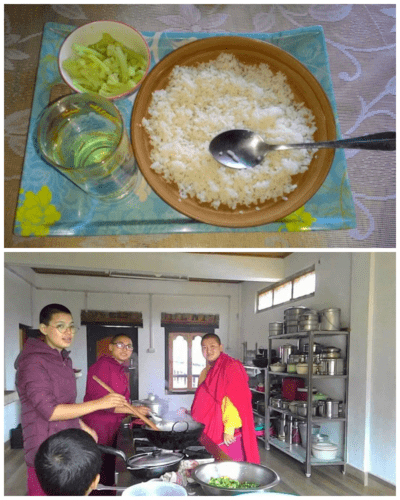 My first day’s breakfast at Sherub Chhoeling Ani Shedra was a small bowl of vegetables, a large plate of rice and a cup of hot water. I thought it was breakfast, so it was simple. Yet, the dishes didn’t change very much in next two weeks. I still eat them even though I didn’t really want to.

The days of teaching in Sherub Chhoeling Ani Shedra. All forty-five Ani, together with the abbot, Khenpo and English teacher, came to the library to join the class. It was so lively!As soon as the class started, I pasted the alphabet map brought from Taiwan on the pillars in the library. And because there were no classrooms here, the library was where we had our classes. In the first class, I taught some greetings such as “Good morning.” And the next morning, when I see an Ani while walking outside, I would say “Good morning!” in Chinese and forced them to speak. After some time, the Ani from the entire Buddhist academy followed me to say good morning. Even the abbot came out to say good morning.  Their shyness had gradually been subdued by my invisible persuasion. There are two young students, six and eight years old. Although they didn’t know very much, they also read it out loud. In the evening, my students would come to my room to review the Chinese class I took that day. They are really attentive! 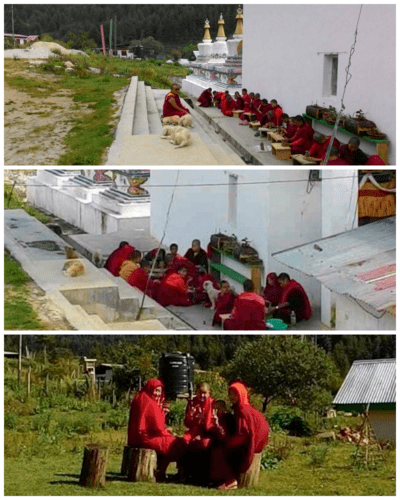 A week later, I taught all 37 Chinese pinyins, and their four tones practice had improved. I am very happy about that. I also taught them how to sing nursery rhymes, lead them to have more interest in learning a new language.  Here, they are having class outside; it was not outdoor teaching, they just don’t have classroom. They can only use the space outside the kitchen, behind the main hall, in front of the main hall, or the small space next to the pagoda to be their classroom. However, with the sunny weather, fresh air, it was less likely they will take a nap in class! 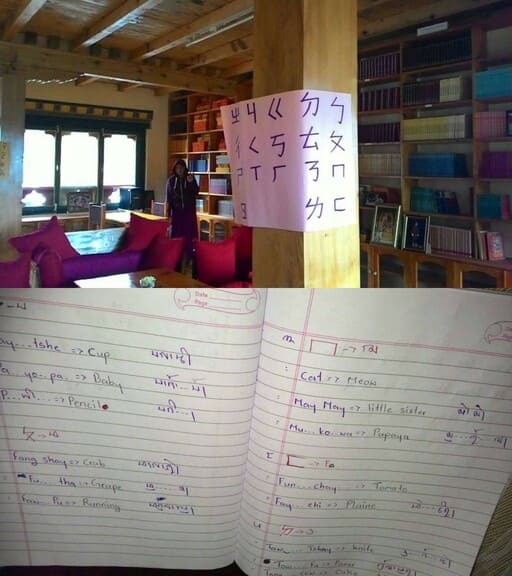 The Ani were very interested in paper clay, including the abbot. When I started to paste the drawings, everyone screamed because this library was so precious to them and they were afraid that I would hurt the pillars. Later, when they saw the paper clay was not harmless, they would happily allow me to paste it.

Early morning, I went around the pagoda three times and sat on the stairs under the main hall. Looking back over the years, DENER had gone through schools and Buddhist academy in remote areas, constantly seeking resources for the school and children, hoping to gradually improve their current situation. Because of a pen, I could now teach Chinese in Bhutan today. Hence, I am very grateful in my heart. 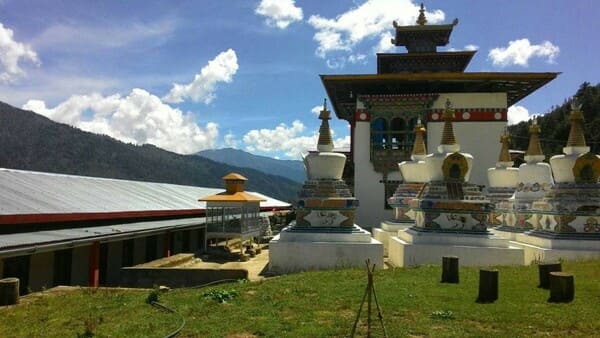 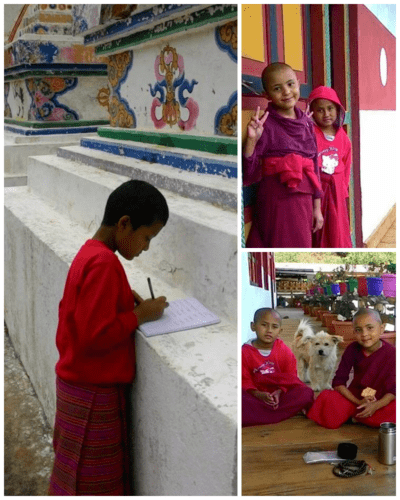 We follow our aspirations and work hard, and each one of us has his or her own sky. As a teacher, although we are not the sky and we can not regard ourselves as the sky of others, yet we can guide people to see the vastness and depth of the sky above them! I think that is the essence of “education”.