The plane slowly landed at our destination-Bodhgaya, India. It was still the dusty road, the rumbling sound of car horns, and tuk-tuk swirling among the people. This reminded us that we have returned to the lively India.

On our second day in India, volunteers from DENER Children’s Foundation was led by Ru Xin, principal of the Karuna School, to visit their schools and distribute stationary.  First, we came to Kashipur, which was about an hour’s drive from Bodh Gaya.

Kashipur District was a slum area in India with about 70 households. Being oppressed by Brahmin landlords for a long time, they were at the lowest level of society.  They had limited access to education and had very poor living conditions. Our team could witness the scenes of disparity between the rich and the poor on the tortuous roads. On the one hand, there were abundant water sources for irrigation and many high-rise houses; on the other hand, there were many dung walls and lack of water supply.

When the car arrived at the school, we were surprised to see the place called three “classrooms.”  It was actually just two and a half walls of buildings with about fifty students in it. The youngest was only three years old, and the oldest was twelve years old. In each of the three classes, two Indian teachers were having classes, while parents, relatives, friends, neighbors were sitting outside

Knowing that we were here to distribute stationery, all of the kids were very excited.  When we distributed the stationary, at first, they were very careful with the stationary and looked at them curiously. Next, we gave them candies, putting them in their little dusty hands, while parents, relatives, friends, neighbors waited quietly. To our surprise, when we put the candies in their hands, the kids just looked at the candies and didn’t eat it. Principal Ru Xin told us they were reluctant to eat, not because they don’t want to, but because candies were extremely rare. As soon as we heard that, our volunteers quickly passed another round of chocolate candy to them. All the kids smiled, and we were grateful at the same time. Giving and receiving was equally important and precious. 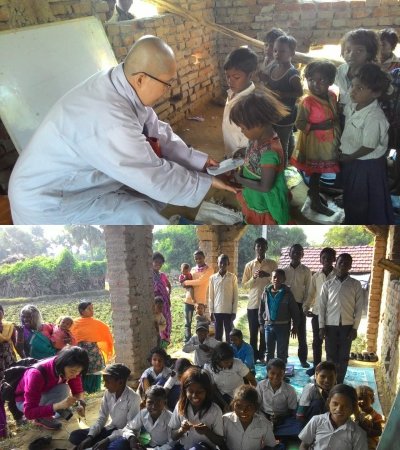 After that, some older children began to write their homework with pens while younger children looked at and played with the stationery in their hands.  Our volunteers were filled with happiness. It turned out that “giving” is so amazing!

When we left the “school”, we learned that it was very difficult for local residents to get water, and they were worried about drinking water. Therefore, our volunteers decided to sponsor the digging of a well to provide drinking water for the local residents.  We hope that they can accept this gift from all of us.

Next, we also went to a preschool in Bodhgay District in Bihar Province.  Most of the children in the preschool were beggars in the surrounding area. They begged for living year after year, not to mention they could not receive education, even their basic life and diet were extremely difficult.  The preschool become these children’s safe haven and provided them with care. Volunteers proficiently distributed this year’s stationery, and children in the preschool responded to us by chanting the Heart Sutra. Although they can only chant half of the Heart Sutra, it made us feel the importance and urgency of proper education. Even for a lonely child, as long as they were given the chance and be encouraged and taught by love, everything is impossible.

On our way back, our little volunteer who was only nine years old accompanied by her mom told us with great excitement that she would use her spare money to buy stationery for these kids next time. She also said she would be a lawyer in the future so she can “voice out” for the poor and the helpless.  The rest of us smiled with relief.  For a long time, DENER has been supporting children with stationary near and far, as a mean to encourage them to continue their education. In this way, we can help the school as well as the children continuously. We also believe that guiding the supporters to show gratitude and kindness is also another meaning of helping students and triggering goodwill in heart to all involved.