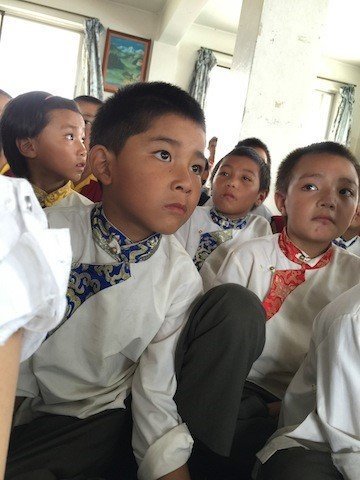 In July 2016, our group went to a long-sponsored school in Nepal for a cultural exchange. A 7.0 earthquake struck Nepal in April 2015, it caused numerous injuries and severely damaged school buildings. Until now, many families still live in the tents. The road to reconstruction was very slow but urgent. The school had about six hundred students, ranged from four to eighteen. Most of these children were from the Himalayas. The classroom building was dangerous for the kids now. The first floor is the auditorium, the second floor is the classroom, and the third floor is the library. The building’s wall bricks were peeling off and the steel bars were exposed, it cannot be used anymore. So, the students were taking class in the built-up tin garage now.

The other facilities of the school were also simple. This was the school’s kitchen, which serves three meals to the students and teachers. These students were all students from poor areas in the Himalayas. Because their homes were in the deep mountains, it would be a long way to go home. Some children have not return home for many years.

The children’s rooms are bunk beds. Six to eight children live in a small room. Although it was crowded, it was neat and clean. The children’s drawings were also posted on the walls.

Because the supplies are lacking here, most of the supplies that are commonly used in schools were supported from outside. The supplies we brought this time include vitamins, stationery, Diabolo and soccer balls.

During the cultural exchange time, children were all very attentive in watching and listening to the music and performances. The director said, “You must have seen our children’s faces. Since the earthquake occurred, I had not seen them this happy in a long time.’’